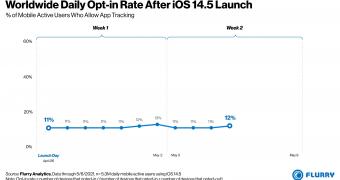 Apple has released the App Tracking Transparency policy with the debut of iOS 14.5 a few weeks ago, and since then they are basically allowed to choose whether they want or not to let apps track them across other apps and websites.

And statistics provided by Flurry Analytics, whose code is being used in over 1 million apps, show that few people actually agree to be tracked.

In other words, most people block apps from tracking them, so the debut of Apple’s new feature is already making an impact in terms of privacy.

More specifically, since the debut of the new iPhone feature, the percentage of people allowing app tracking hasn’t exceeded 12 percent, while in the United States, the numbers are even more surprising. Only some 2 to 4 percent of the iPhone users want to be tracked and allow apps to do this on the latest iPhone operating system version.

“Until now, apps have been able to rely on App… (read more)