This Is the New Battery Icon Coming to Notched iPhones 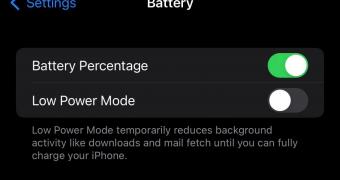 While iPhone users have pretty much gotten used to living without a battery percentage indicator on their devices, it doesn’t necessarily mean this is the most convenient approach.

Since the release of the iPhone X back in 2017, new-generation iPhones have been lacking a battery percentage indicator, instead only showing a generic battery icon to indicate the level in real-time.

It goes without saying an actual percentage comes in handier, but on the other hand, seeing such information isn’t possible without sliding down from the top of the screen. This is where Apple continues to display a battery percentage indicator, pretty much because this is the only place where the notch leaves enough room for this kind of data.

Apple, however, looks like it has found a way to display the battery percentage, even on devices where a notch is available.