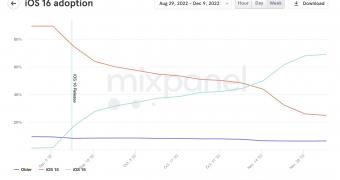 Apple rarely talks about the adoption of the company’s latest iOS versions, and while the company does share official numbers every now and then, it’s yet to publish such information for iOS 16.

Announced in September, iOS 16 is one of the biggest updates in a long time. It comes with support for widgets on the lock screen, more customization options, and so many other changes that substantially revamp the experience on an iPhone.

But even so, the adoption of iOS 16 isn’t happening at the pace that most people expected it to happen.

New data published by Mixpanel, via MacRumors, reveals that the adoption of iOS 16 is reaching 70 percent, nearly 100 days after the launch of the operating system. iOS 16 is running on 68.90 percent of the supported devices, while iOS 16 is current… (read more)