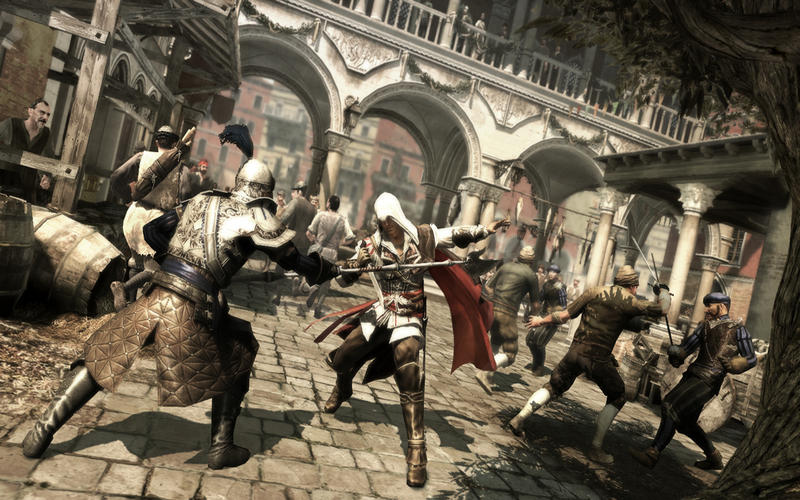 Hello everyone, you can now download Assassin’s Creed 2 for Macbook & iMac, before you do that, let me ask — how are you all doing today? I hope you are all having a great week so far. My week has been pretty good. I am going on a little mini vacation starting Friday on the 28th until November 3rd. That’s like what, a week? Better than nothing right? Lol anyway, please read on…

Today we will highlight an awesome game, actually a damn classic and on top of that, a movie called Assassin’s creed came out in late 2016 starring Michael Fassbender and am sure it a good movie, I plan to watch it before this year is over, I had the original Assassin’s Creed games on PlayStation 3, man it was awesome and this game listed below carries on that awesome tradition. Lets find out how.

What Is Assassins Creed II?

The game is set in the 21st century, with player-controlled protagonist Desmond Miles escaping from Abstergo Industries with an employee, Lucy Stillman, after being forced to relive the genetic memories of ancestral assassin Altaïr ibn La-Ahad through a machine known as the “Animus”. After escaping from Abstergo, Desmond enters a device which is more advanced than the original Animus, the Animus 2.0, and relives the genetic memories of ancestral nobleman Ezio Auditore da Firenze, who lived during the Renaissance period of the late 15th century in Italy.

The player controls Ezio, who becomes an Assassin after his father and brothers are murdered by a traitor to the Auditore family. While controlling Ezio, the player can explore game renditions of Italian cities, regions and landmarks in open world gameplay.

The player may now swim in water, and eagle vision —the ability to identify specific people and landmarks— can now be used in third-person view and while moving. A young Leonardo da Vinci is present in the game, aiding the player by creating new weapons from translated “codex pages” that Altaïr, the original game’s main character, left behind for future assassins’ analysis and insight.

Within the game, the player will be able to use Leonardo’s flying machine (based on real-life plans by Leonardo) while on one mission. The player also has the ability to control a carriage on one level, but can row gondolas, as well as ride horses at any point in the game where they are readily available between towns and cities.

– New weapons to choose from including an axe, a hammer, a mace, a spear, 2 different sword types, a spear axe, and 2 smaller blades
– Swimming
– Da Vincis workshop is in the game
– Locations include Saint Marks Basilica, The Grand Canal, The Little Canal, and the Rialto Bridge.
– The game opens in 1476, Altair is from 1191
– You play as a new ancestor of Altair / Desmond
– Big characters are in the game including Machiavelli, Caterina Sofrza, and Lorenzo de Medici
– You will pilot the Da Vinci’s flying machine.
– Game will feature a new notoriety system that governs how enemy soldiers and people will treat you.
– You can disarm enemies and use their own weapons against them this time.
– Each weapon has a special move.
– 16 unique mission types.
– Hidden objects (like flags in the first one) are there to uncover but this time if you track them down you will get in-game bonuses that make it worth your time.
– New enemy types with unique attitudes and weaknesses are present in the game. Archers, as well as elite enemies, dagger wielders, “Brutish” armored troops with heavy armor and 2 handed swords and axes, and an intelligent halberd enemy will probe hiding places with their weapons if they think you’re nearby.
– While hiding in a hay bale you can assassinate people this time, but it may expose your position.
– You can still climb towers and ride horses
– The Lorendo de Medici assassination attempt is in the game

NOTE: Assassin’s Creed 2 is NO LONGER AVAILABLE FOR macOS 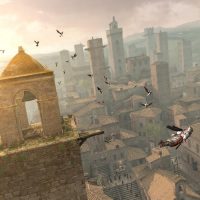 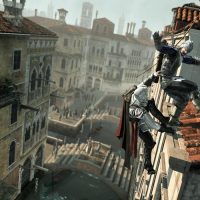 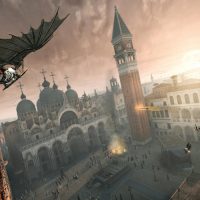 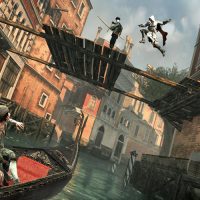