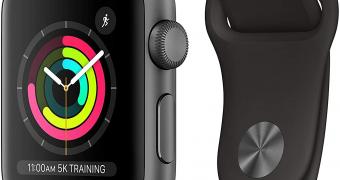 The Apple Watch is hands down the best-selling smartwatch in the entire world, and third-party data shows that more and more units are being sold every quarter.

And while most people choose to purchase the latest-generation model, the previous Apple Watches are still worth the money, especially because they come with similar specs at a lower price.

Apple Watch Series 3 is the best example in this regard, as this particular model can be yours right now at an unbeatable price. And it’s all thanks to a 4th of July sale that Apple has recently launched on its Amazon store.

The Series 3 can be yours right now for just $179, which is a massive discount that obviously won’t last long. The 38mm version is even cheaper, as it’s available for $169.

We know what you’re thinking. With the Apple Watch Series 6 already on its way and scheduled to launch in the fall, is it stil… (read more)