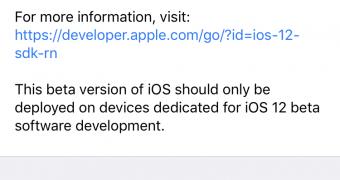 The latest Beta over-the-air update for the upcoming iOS 12 has been pulled by Apple after numerous reports regarding slowdowns, crashes,  and other problems.

While it’s understandable that development updates are not meant to be stable, necessarily, the latest problems with the Developer beta 7 OTA update are more than just the regular issues that are typically reported in this situations.

Apple releases over-the-air updates for the operating system (OTA), but they are doing it in batches. Not everyone gets the update at once, for a couple of reasons. For one, it would put the servers under a lot of strain, and secondly, Apple needs to make sure that if there is a problem only a few people will be actually affected.

The update has been temporarily pulled

After numerous users have reported slow-downs and various other issues with their devices following the iOS 12 developer beta 7, the OTA update was suspended. It’s no longer available for downlo… (read more)