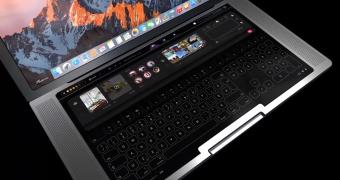 Microsoft’s Surface lineup currently comprises some of the most advanced 2-in-1s and laptops on the market these days, and many agree that by sticking with a traditional form factor, Apple is missing out on a completely new market.

But while Apple doesn’t even want to bring touchscreens to its MacBook device series, customers do want to see such upgrades being released, and some hope for even more substantial improvements for the next generations.

A concept created by Turkish designer Furkan Kasap envisions how one such improvement would make its way to the MacBook, imagining what Apple’s notebook would look, work, and feel with a full-touch keyboard.

Basically, the concept expands the Touch Bar concept to cover the entire keyboard, replacing physical keys with virtual ones that can serve more than just a single purpose.

Apple not a big fan of touchscreens on laptops

This is actually the number one benefit of such an implementation. A virtual ke… (read more)