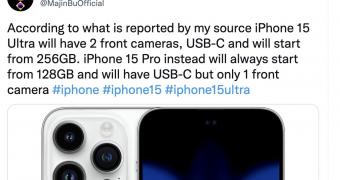 Apple has recently launched the iPhone 14, but it looks like the world is already looking forward to getting its hands on the iPhone 15.

And as it turns out, Apple is already working hard on getting the device ready, with the company allegedly planning some pretty big changes for the lineup.

Tipster Majin Bu has recently revealed on Twitter that Apple plans to give up on the Pro Max and replace it with a brand-new Ultra name that would create more consistency in its portfolio. This is because the company has recently launched the Apple Watch Ultra, so by also bringing an iPhone Ultra to the market, it would make it easier for customers to figure out what model is the best of all.

iPhone 15 Ultra to be the best iPhone ever

And of course, Apple is planning big upgrades on the Ultra, as the company wants… (read more)