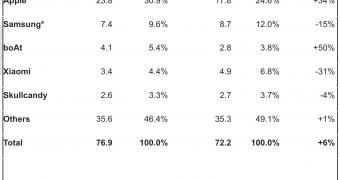 Everybody knows the AirPods are selling like hotcakes, but new data from Canalys comes to confirm that Apple is by far the leader of the so-called TWS, or true wireless stereo, market.

Apple, for example, sold no more, no less than 23.8 million AirPods in the third quarter of the year, which means the company controlled a market share of 30.9 percent.

“The global smart personal audio market suffered its second consecutive decline in Q3 2022, with shipments down 4% to 113.6 million units. TWS remained the only category (including wireless earphones and wireless headphones) to show an increase, with 6% growth to 76.9 million units in the quarter. Apple (including Beats) defended its l… (read more)