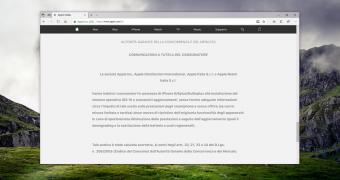 Apple’s deliberate slowdown of iPhones with degraded batteries keeps causing trouble to the American tech giant, as the company has now been requested to post a mea culpa message on its Italian website.

After being fined 10 million Euros by the Italian antitrust watchdog in late 2018, Apple has thus posted a note on the page to state that an update it released to certain iPhone models reduced their performance.

Apple publicly admitted in late 2017 that it deliberately slowed down a number of iPhone models with degraded batteries in order to prevent unexpected shutdowns.

While this approach is believed to have pushed some customers to purchase new iPhones, Apple later rolled out an iOS software update to reveal the battery health in order to let users know when battery replacements might be required.

Additionally, Apple launched a battery replacement program with a cost of just $29, down from $79.