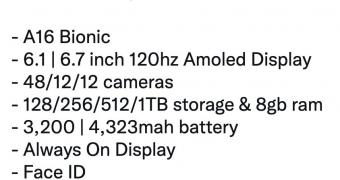 Apple is working around the clock on getting the next-generation iPhone ready for prime time, and according to new information that has reached the web this week, the company is also planning an increase in terms of pricing.

More specifically, tipster The Gallox says on Twitter that Apple could make the iPhone 14 Pro models more expensive than the devices they replace, with the 6.1-inch device to start at no less than $1,099.

At the same time, a price increase is also expected for the iPhone 14 Pro Max, as the base model is expected to sell for $1,199. This is also a notable price bump, as the current iPhone 13 Pro Max can be purchased for $1,099.

Apple is expected to take the wraps off four different iPhone models this year, though the new lineup will witness the introduction of several notab… (read more)