1 in 2 Android Users Apparently Interested in Getting an iPhone 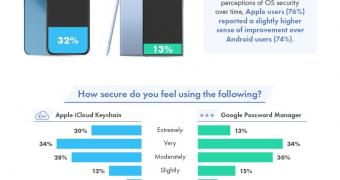 Android users planning to switch to an iPhone and the other way around is something that makes total sense these days, especially because each platform comes with its very own focus that may or may not be everybody’s cup of tea.

And new research conducted by Beyond Identity shows that Apple’s investments in privacy and security on the iPhone is working like a charm, as quite a lot of Android users are planning to switch sides and give up on their smartphones.

When asked about the security of their operating systems, 76 percent of the Apple users said they are comfortable with their iPhones, whereas the percentage dropped to 74 percent in the case of Android.

Interestingly, the security of the operating systems makes 36 percent of Apple users consider switching to Android, whereas only 25 percent of the Android users are thinking of getting an iPhone.