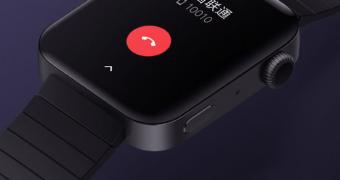 This wouldn’t be the first time Xiaomi is accused of copying Apple, but the Chinese tech giant is now getting ready to launch a smartwatch that looks a lot like the Apple Watch from pretty much every single angle.

In fact, Xiaomi’s new smartwatch not only that reminds of the Apple Watch, but also seems to be using some design cues from the iPhone 4, which itself is one of the most successful iPhone models ever released.

Xiaomi hasn’t provided any specifics on this smartwatch, other than it’ll be unveiled at an event on November 5.

As you can see in the teasers here and originally posted on Weibo, the Xiaomi smartwatch features what looks like the Apple Watch digital crown, as well as a side button and even a microphone cutout on the right side.

The Chinese company is becoming more and more interested in wearables, a market that it’s already dominating together with Apple.