TikTok, the App the US Wants to Ban, Tops Download Charts on iPhone 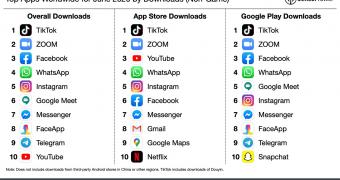 The United States authorities are currently pondering banning TikTok in the country, but this doesn’t necessarily mean that users there are also ready to abandon the app.

According to information provided by Sensor Tower, TikTok was the most downloaded non-gaming app in the entire world last year, reaching no less than 87 million installs. According to the official numbers, this represents an increase of no less than 52.7 percent from the same month in 2019.

While India is the country with the biggest number of downloads for TikTok, the United States comes second, so it’s very clear that users in this market aren’t willing to abandon the app despite all the claims lately.

Zoom secured the runner-up place in both the App Store and the Google Play Store, Sensor Tower says.