They Laughed at It, Bought It Anyway: Apple’s $19 Polishing Cloth Is Sold Out 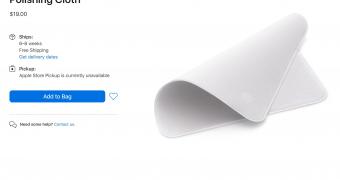 Apple once again took the world by surprise earlier this week when it announced a so-called polishing cloth that’s supposed to help keep its devices clean and tidy.

And just like any other product, the polishing cloth doesn’t come cheap, with the Cupertino-based tech giant selling it for no less than $19.

Needless to say, it was just a matter of time until the cloth became a meme and everybody started to make fun of it, claiming once again that Apple is being ridiculous by charging $19 for a piece of cloth.

Especially when, in theory, you should be able to clean your devices with much cheaper materials that don’t cost more than a couple of bucks.

And yet, despite everybody making so much fun of the polishing cloth, quite a lot of people actually bought in anyway, so right now, the new “accessory” is sold out at Apple’s online store. In other words, if you’re trying to get the cloth today, you won’t receive it until late November, and the more orders are sent, the… (read more)