The Switch to USB-C Will Makes iPhones Blazing Fast 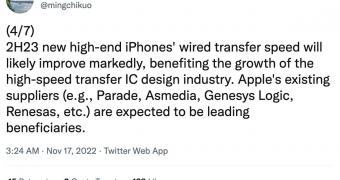 Apple has no other than to switch to USB-C following new regulations adopted in Europe, but as it turns out, the company wouldn’t wait until 2024 to give up on Lightning and embrace the new connector.

And according to analyst Ming-Chi Kuo, the transition from Lightning to USB-C will make the iPhone blazing fast.

In fact, the wired high-speed transfer will only be offered on the Pro models, Kuo says, as the standard versions will stick with the USB 2.0 standard that are currently serving as the foundation of Lightning.