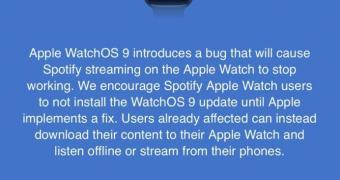 watchOS 9 is live with so many improvements, including sleep tracking, so it’s no surprise that many users rushed to update their devices.

However, despite this growing excitement for a new Apple Watch update, Spotify tells its users to, well, wait. This is because the company is aware of a bug in watchOS 9 that breaks down the streaming, making its service unavailable.

“Apple watchOS 9 introduces a bug that will cause Spotify streaming on the Apple Watch to stop working. We encourage Spotify Apple Watch users to not install the watchOS 9 update until Apple implements a fix. Users already affected can instead download their content to their Apple Watch and listen offline or stream from their phones,” Spotify says.

Needless to say, Apple hasn’t yet confirmed that it’s working on a fix, though there’s a good chance it would be included in the very next watchOS update.