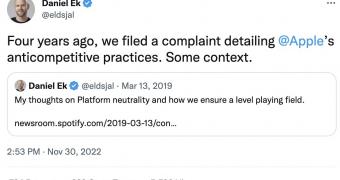 Spotify has already criticized Apple for the 30 percent cut it takes on App Store purchases, and after previously filing an antitrust complaint in Europe back in 2019, the company CEO is asking for prompt action against the Cupertino-based tech giant.

In a series of tweets, Daniel Ek explains, with the help of links from consumer watchdogs from across the world, that Apple violates competition rules by favoring its own apps in the App Store.

More specifically, Ek says Apple promotes Apple Music on the App Store, whereas Spotify needs to a pay 30 percent fee for all subscriptions that customers get through the app on their iPhones and iPads.

“Four years ago, we filed a complaint detailing @Apple’s anticompetitive practices. Over and over again @Apple gives itself every advantage while at the same time stifling innovation and hurting consumers. Apple acts in self interest but also doesn’t seem to c… (read more)