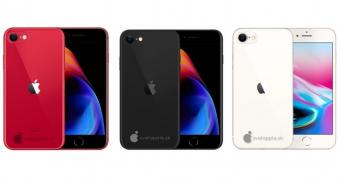 Apple is expected to unveil a new low-cost iPhone in the spring, and according to a new report, this device could be called iPhone 9.

Based on iPhone 8, the iPhone 9 could essentially be a second-generation iPhone SE that Apple would position as a more affordable alternative to its premium models.

iPhone 9 will be available in three different colors if a recent leak coming straight from China is anything to go by. The leaked renders claim the iPhone 9 will be offered in white, black, and red, although there’s a chance the red version will actually be a (PRODUCT)RED release.

iPhone 9 is expected to feature a 4.7-inch LCD screen similar to the one that Apple used on the original iPhone 8.

In fact, most of the iPhone 9 will be borrowed from the iPhone 8, including the overall design that doesn’t necessarily align with Apple’s modern iPhone strategy. For example, ther… (read more)