Most People Think the iPhone 14 Plus Is Too Expensive 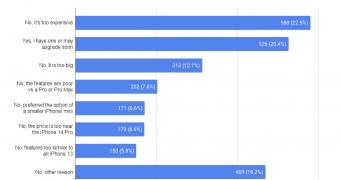 Apple launched the iPhone 14 Plus with much fanfare, claiming that it comes with the biggest battery life ever in an iPhone.

As an all-new model, the iPhone 14 Plus was supposed to bring more users to larger screens, but as it turns out, the demand so far is weak, to say the least.

A survey conducted by SellCell shows why.

As it turns out, most people think the iPhone 14 Plus is too expensive, with 22.5 percent of the respondents claiming they don’t want to buy the device because of the high price. On the other hand, 1 in 5 people claims they may be buying a Plus soon.

12 percent of the respondents claimed the device is too big, while 7.8 percent said the iPhone 14 Plus lacks in terms of features versus the Pro models.

When it comes to the iPhone 15 lineup, the survey shows that most people are excited with a new design that would make the device fee… (read more)