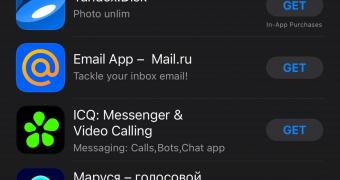 A new Russian law that came into effect on April 1 requires companies selling devices in the country to give users the option to pre-load a series of locally developed apps as an alternative to the typical apps already installed on the device.

Like others, Apple is one of the companies that need to comply with the regulation, so iPhones have been updated with a new setup experience in Russia where users are directed to a list of apps where they can choose what to install.

This shows up on the first-run experience, and right now, some of the apps that Apple provides to users include the public services app developed by the Russian government, Mail.ru (a mail service that can be used as an alternative to Apple’s Mail app), Yandex Maps, and Yandex Browser.

All these apps are displayed in a list that seems to be hosted in the App Store, and they also include OK Live, VK, ICQ, and others.

“In compliance with… (read more)