Home » News » iPhone Users Tempted to Buy Other Apple Products, Not All Do It Though

iPhone Users Tempted to Buy Other Apple Products, Not All Do It Though 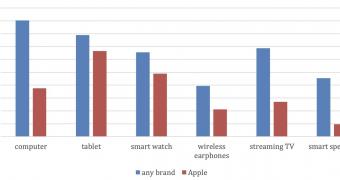 Research conducted recently by CIRP shows that most Apple users who own an iPhone are very tempted to purchase another product developed by the Cupertino-based tech giant, though not everybody does this at the end of the day.

More specifically, nearly 90 percent of the people who own an iPhone also own a computer, but on the other hand, out of these respondents, fewer than 40 percent said they have a Mac.

When it comes to tablets, however, the iPad is clearly the preferred choice, as close to 80 percent of the iPhone owners say they have a tablet, with nearly 70 percent explaining they got themselves an iPad.

Apple needs to do better

Some 65 percent of the iPhone users say they also have a smartwatch but less than 50 percent have an Apple Watch, and given the limited functionality of some devices on iOS, there’s a chance some people went for Xiaomi, Fitbit, and Garmin devices.