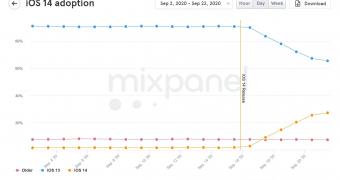 Apple announced iOS 14 with much fanfare last week for the iPhone 6s and newer, and needless to say, the official rollout was received with a lot of enthusiasm by users across the world.

And by the looks of things, no less than 25 percent of the eligible devices have already installed iOS 14, according to data shared by Mixpanel, despite the new operating system being released only a few days ago.

However, worth emphasizing is that the adoption figures also include iPadOS, the new OS available for Apple’s iPad, and also announced last week during the digital event.

The numbers show that iOS 13 usage is declining, and this is an indication that most devices upgraded to iOS 14 were running the previous version of the operating system.

One of the biggest changes in iOS 14 is the addition of widgets, which are supposed to make the home screen feel more dynamic.

On the other hand, worth… (read more)