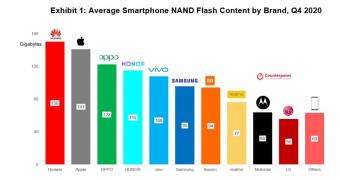 The necessary amount of storage a phone owner needs these days has increased a lot in the last few years, and research conducted by Counterpoint shows that 128GB is rapidly becoming the new default in the entire market.

By the looks of things, the average Huawei user stores no less than 150 GB of data on their devices, while those getting an iPhone need at least 141 GB of storage for their files. As far as Samsung is concerned, the average here is just 95 GB.

But according to Counterpoint, most people are now buying the top versions of the devices currently available on the market, including iPhones, simply because they come with more storage.