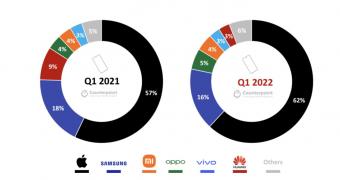 New data shared by Counterpoint reveals that iPhone was the best-selling premium device in the first quarter of the year, with Apple reaching its highest first-quarter share in this segment since Q1 2017.

Apple sales accounted for no more, no less than 62 percent of the total premium segment, according to Counterpoint, up from 57 percent in the same quarter a year ago.

Samsung was the runner-up, though the South Koreans went down from 18 percent in Q1 2021 to 16 percent in the first quarter of 2022. However, the Galaxy S22 Ultra was the best-selling premium Android device during the quarter.

“Apple continued to lead the premium market, exceeding 60% share for the second consecutive quarter. This was driven by the iPhone 13 series. The iPhone 13 has been the best-selling model globally each month since October 2021. This was also the highest first quarter share for Apple in th… (read more)