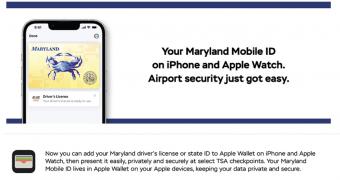 Apple has already announced the Digital ID feature in a series of states, but as it turns out, the company is now getting ready to launch it in more regions.

iPhones replacing IDs and the driver’s license is something that comes in incredibly handy, especially because the traditional documents are no longer needed. But of course, before this feature can become available in a specific state or country, Apple needs to work together with the local authorities on the official implementation.

The company hasn’t yet released an official announcement on this, but it looks like the Digital ID feature is about to go live in Maryland, according to the official page of the government.

“Now you can add you Maryland driver’s license or state ID to Apple Wallet on iPhone and Apple Watch, then present it easily, privately, and securely at select TSA checkpoints. Your Maryland Mobile ID lives in Apple Wallet on your Apple device, keeping your data private and secure,” the Marylan… (read more)