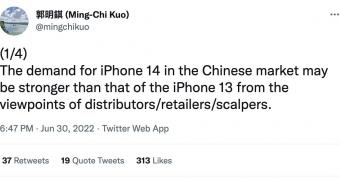 Apple is currently giving the finishing touches to the iPhone 14 launch strategy, as the mass production is expected to begin in just a few weeks.

And given the debut of the new-generation iPhone is expected to take place in September, we already have the first forecasts regarding the sales the new model could record.

Apple analyst Ming-Chi Kuo says he’s seeing evidence that indicates the demand for the iPhone 14 could be higher than the one recorded by iPhone 13.

In theory, this isn’t necessarily a surprise, especially given the iPhone 13 sales have been hit by the component shortage, but Kuo says Chinese retailers are required to pay a higher prepaid deposit to make sure they have enough iPhone 14 supply.

iPhone 14 expected to launch in September

As a result, it looks like everybody is confident the iPhone 14 would be a hit.