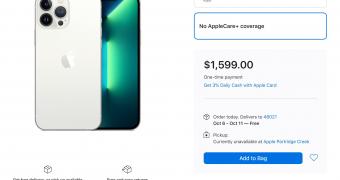 Apple has started taking pre-orders for the iPhone 13 lineup, and unsurprisingly, the shipping of some particular models is already being pushed back due to the strong demand.

In theory, customers who rushed to pre-order the iPhone 13 shortly after the Apple Store page went live should receive their shiny new smartphones next Friday.

But given the demand, Apple is now pushing back the shipping times, with some devices set to arrive in the hands of their new owners in October.

One of these models is none other than the 1TB iPhone 13 Pro Max, which in the United States costs a whopping $1,599.

While some believe the phone is just too expensive, others want to get it by any means, and judging from the shipping times in the Apple Store, there’s a chance quite a lot of people ordered one.

The iPhone 13 Pro Max with 1TB now ships between October 6 – October 11, according to Apple.

First iPhone with 1TB of storage