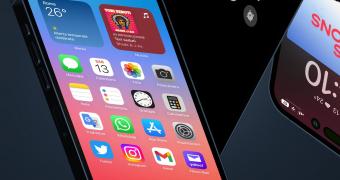 iOS 16 is just around the corner, as Apple is expected to begin rolling it out to production iPhones in approximately one month.

The new operating system version is still in the beta testing stage at this point, so anyone can already try it out before the public rollout begins.

Concept designer AR72014, however, has created a concept that looks as good as the real deal, providing us with an early look at what iOS 16 is going to look when it runs on an iPhone 14 Pro Max.

Of particular notice is the support for a punch-hole screen, as this is a change that Apple is believed to be planning for the iPhone 14 Pro and the iPhone 14 Pro Max. The standard iPhones are expected to retain the notch.

The concept shared on Twitter also envisions an always-on display feature, which is expected to be available in iOS 16 likely of the latest-generation iPhones.