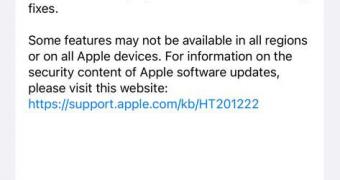 Apple has just released a new important update for iPhones, as the company gave the go-ahead to iOS 15.5 for production devices.

Needless to say, iOS 15.5 is available for the same devices that received iOS 15 in the first place, namely iPhone 6s and newer. If you’re using one of the latest-generation iPhones, you are obviously good to go.

The new operating system update comes with several notable improvements, and one of them concerns Apple Cash.

The Cupertino-based tech giant explains that Apple Cash customers can now send and request money from their Apple Cash directly from the Wallet.

Then, iOS 15.5 comes with an important change for Apple Podcasts, an app that has received plenty of attention from Apple lately.

“Apple Podcasts includes a new setting to limit episodes stored on your iPhone and automatically delete older ones,” Apple explains.

And last but not least, Apple says that it managed to fix a glitch impacti… (read more)