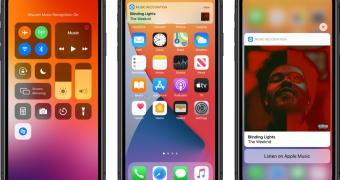 Apple has officially released the very first public beta of iOS 14.2, which is essentially the first major update for iOS 14 after the operating system was announced earlier this month.

Needless to say, anyone can download iOS 14.2 today, although the typical recommendations are still valid. You shouldn’t install this OS on your main device, as the likelihood of bugs is obviously pretty high since the purpose of these builds is to help find issues and fix them before the public launch happens.

There is one major change that is included in iOS 14.2, and it concerns the music recognition service that is powered by the Apple-owned Shazam.

More specifically, beginning with this update, users can just add a dedicated shortcut to launch the music recognition feature right from the Control Center. Running it comes down to just a tap, so you only need to open the Control Center and then tap this icon to recognize a specific song that’s playing around you.