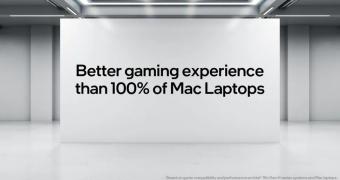 Apple officially made the switch from Intel to Apple Silicon last November when the company launched the first M1-powered computers, and in the long term, the Cupertino-based tech giant is fully committed to equipping more of its devices with the custom ARM chip.

In the meantime, Intel, which has most likely felt the impact of Apple’s change of mind, has embraced a new approach, trying to tell the world just how awesome Windows PCs actually are.

Not only because they run Microsoft’s operating system, but also because, you know, they come with Intel chips.

At a recent Computex presentation, for example, Intel directly said that Windows provides “better gaming experience than 100% of Mac laptops,” explaining that over 50 percent of the super-popular games out there don’t run on Apple computers.

Does Apple care about these claims? Not really