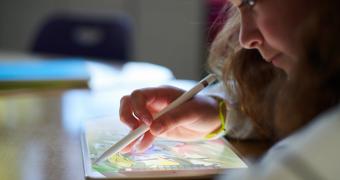 Apple’s new Spring Loaded event this month is likely to bring us a brand new Apple Pencil, and a video that’s making the headlines these days claims to provide us with a closer look at everything.

As you can see in the embedded tweet below, the short video doesn’t disclose a lot of specifics about the alleged Apple Pencil 3, but it does suggest a glossy finish could be used. A flat side is likely being used for charging, and at the first glance, the device wouldn’t be substantially different from its predecessors.

The return of the glossy finish, however, which was available on the first-generation Pencil, is yet to be confirmed, so take everything with a pinch of salt for now.

There was a time when Apple itself played down the impact of devices with pencil support, with the company actually mocking Microsoft’s investments in 2-in-1 devices (which pretty much helped make pen input more mainstream in the PC world).