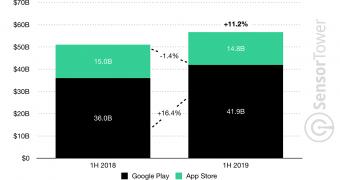 We’ve known for a while that Apple’s App Store typically generates bigger sales than the Google Play Store, but new data provided by SensorTower comes to reveal that the gap between the two is increasing.

The new numbers for the first half of 2019 show that app sales in the two stores reacheD $39.7 billion, an increase of no less than 15.4 percent from the same period a year ago.

When it comes to the App Store alone, sales here totaled $25.5 billion, up 13.2 percent from the first half of 2018. This means Apple’s App Store generates some 80 percent more money than the Google Play Store, which recorded an estimated gross revenue of $14.2 billion in the same period.

WhatsApp, the most downloaded app

Tinder is currently the app that brings home the bacon, as it secured the leading position with total sales of $497 million on iOS and Android. SensorTower says Tinder managed … (read more)