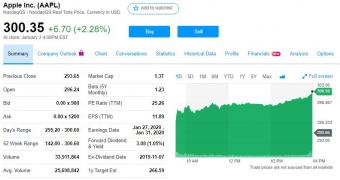 Apple stock reached $300.35 in after hours trading on January 2, pushing the company’s market capitalization to $1.33 trillion. This is a growth of nearly 100 percent in just 12 months following what eventually turned out to be one of Apple’s best years in the last decade.

The first months of 2019 proved to be quite a challenge for Apple after the company revised its financial expectations for the first fiscal quarter of the year, mostly due to slower than anticipated sales.

Tim Cook’s announcement caused Apple stock to drop to $142.19, and many analysts predicted a tough year ahead for the first company in the world that reached $1 trillion market valuation.

New iPhones on their way

However, the new-generation iPhone, along with investments in services, have spearheaded a super-aggressive growth for the Cupertino-based tech giant, eventually pushing it to $3… (read more)