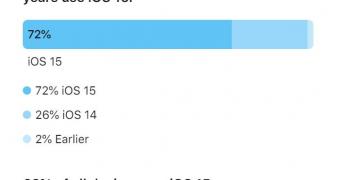 Apple has finally released some updated numbers to provide us with a closer look at the iOS 15 adoption, confirming that its new operating system version isn’t necessarily as successful as its predecessors.

In other words, not everybody is rushing to install iOS 15, and looking at the so many bugs experienced since its release, it’s really no wonder why.

iOS 15 has caused massive problems, especially on CarPlay, with users complaining of all kinds of glitches from crashing apps to random disconnects. The most recent version of iOS, namely 15.2.1, introduces fixes for many of these bugs, therefore finally offering the experience that should have been there from the very beginning.

As for the iOS 15 adoption, the new Apple data for the devices introduced in the last four years reveals that 72 percent of these iPhones are currently running iOS 15. 26 percent of them are sti… (read more)