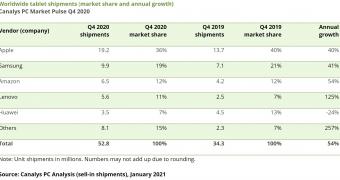 We’ve known for a while that Apple’s iPad was the preferred choice for most people out there whenever it comes to buying a new tablet, and new research from Canalys indicates sales of this device are continuously on the rise.

And the fourth quarter of 2020 brought another important achievement for the iPad, as Apple recorded the best tablet performance since Q4 2014.

And it’s all because Apple managed to sell no less than 19.2 million units during the quarter, more than double the number of devices sold by second-placed Samsung.

Huawei, the only company losing ground

The South Koreans sold a total of 9.8 million tablets during the quarter, while Amazon reached third place with 6.5 million units. Surprisingly, Lenovo was the one that impressed with its growth, as its tablet sales jumped no less than 125% to reach 5.6 million units, something that was more or less to be expe… (read more)