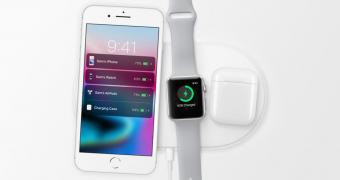 With wireless charging becoming a more prominent feature of new Apple devices, it makes sense for the company to also launch a wireless charger too, though, by the looks of things, this is a project more complex than anyone expected.

Originally announced last year alongside the iPhone X, the so-called AirPower is still nowhere to be seen due to certain technical issues that the development team has encountered.

Truth be told, Apple wanted this to be one of the most advanced wireless chargers out there, so instead of charging just one product, it would have been able to charge three devices at the same time.

Furthermore, with iOS integration, Apple was supposed to allow the charging iPhone to show the battery level of the other connected and charging devices too, like the Apple Watch.

But all these features have caused particular struggles for Apple, and the launch has already been delayed, with the company claiming the device may… (read more)