Apple Watch Series 8 Will Be Compatible With Old Bands 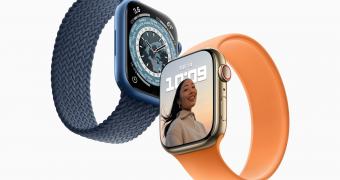 While the next big launch in the smartwatch market is the Samsung Galaxy Watch 5, which is projected to see the daylight next week, the next-generation Apple Watch is generating quite a lot of buzz, especially as its unveiling is also approaching.

Scheduled to be announced in September, the Apple Watch Series 8 will obviously come with some important news as well, though, at first glance, Series 7 buyers will have little to be excited about, unless they go for the Pro model.

According to ShrimpApplePro, who has a very good track on Apple scoops, the Cupertino-based tech giant will launch the Apple Watch Series 8 in 41m and 45mm sizes. In other words, the devices will be almost identical with the model they replace, and while at first glance this is disappointing news, this approach comes with another benefit.

To go live in September