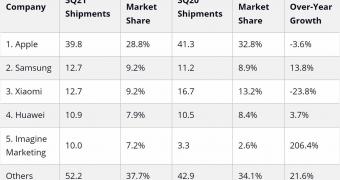 The third quarter of the year brought a massive decline for the Apple Watch, as sales of the world’s number one smartwatch went down over 35 percent, according to market research firm IDC.

However, a recent report published by the company reveals that Apple remained the number one company in the wearable market thanks to a solid performance from AirPods and Beats.

Apple therefore controls 28.8 percent of the market, ahead of Samsung and Xiaomi, both with 9.2 percent.

But Samsung itself has also performed strongly during the third quarter.

“Samsung’s recent launch of the Galaxy Watch 4 Series has been well received and is a significant step forward for the watch maker and Google, thanks to the move from Tizen to Wear OS. Not only has Samsung focused on growing its wearables business by bundling its hearables, watches, and bands with smartphones, but the company is also attempting to steal wallet share from fashion spending with the launch of bespoke edition watche… (read more)