Apple Unsurprisingly Betting Big on Indian Production of the iPhone 14 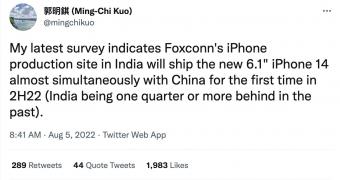 The geopolitical tensions involving the United States, China, and Taiwan lately have convinced Apple that it’s time to accelerate its efforts to reduce its dependence on Chinese factories.

As a result, the Cupertino-based tech giant is now planning to boost its production capabilities in India, where the company was already assembling the iPhone SE and the iPhone 13.

But according to well-known Apple analyst Ming-Chi Kuo from TF International Securities, the company now wants to start the production of the iPhone 14 in India earlier, almost on part with the beginning of the iPhone production in China.

Foxconn’s plant in India will be responsible for making the 6.1-inch iPhone 14, it seems.

“My latest survey indicates Foxconn’s iPhone production site in India will ship the new 6.1″ iPhone 14 almost simultaneously with China for the first time in 2H22 (India being one quarter or more behind in the past),” Kuo <a href="https://twitter.com/mingchikuo/status/155542872… (read more)