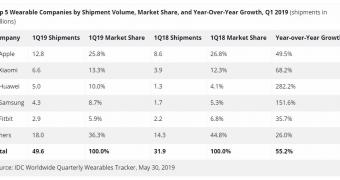 Apple continues to be the leader of the wearable market, according to new data provided by IDC, but troubled Huawei is the company to watch these days.

IDC notes that Apple sold a total of 12.8 million units in the first quarter of 2019, up no less than 49.5% from the same quarter a year ago. This means Apple controls 25.8% of the wearable market, particularly thanks to the Apple Watch, whose latest generation is selling like hot cakes.

Xiaomi was the runner-up in Q1 with 6.6 million sold units and 13.3% share, and the Chinese company is also growing at a fast pace, with a 68.2% shipment increase during the quarter.

All eyes on Huawei

But the star of the show is none other than Huawei, which is now trying to deal with a ban that doesn’t allow the company to use products developed by American firms.