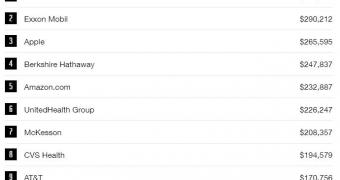 While Apple and Microsoft are battling for the world’s most valuable company title, the most recent Fortune 500 rankings show that the Cupertino-based iPhone maker continues to be the most profitable company in the world.

When it comes to the profits these company make, Apple is number one ahead of JPMorgan Chase and Alphabet. But what’s notable is that Apple’s profit is nearly twice the amount of the profit obtained by Alphabet, the parent company of Google.

In terms of overall rankings, which are based on revenue, Apple is only third after Walmart and Exxon Mobil. However, the company continues to be placed better than all of its rivals in the tech field, including here Amazon, Alphabet, and Microsoft.

Apple continues to be the technology leader

And speaking of technology, Apple is number one here judging… (read more)