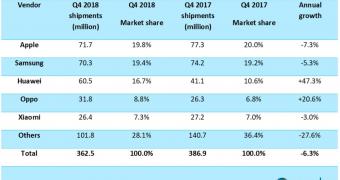 Apple was the world’s number one smartphone manufacturer in the fourth quarter of 2018, according to data provided by Canalys, as it managed to overtake Samsung for the first time in many months.

The Cupertino-based tech giant sold an estimated of 71.7 million iPhone during the quarter, securing a 19.8% market share worldwide, down from 20% in the same quarter a year before.

When it comes to overall sales in 2018, Samsung continues to be number one, but still on a decline. The South Korean company fell to 21.2% market share, followed by Apple and Huawei with 15.3% and 14.8%, respectively. H… (read more)