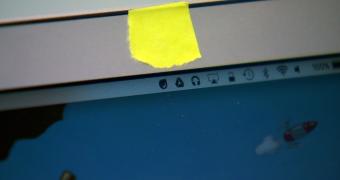 Let’s admit it, putting some tape over the camera on our laptops is one of the first thing we do when getting a new computer because, after all, a physical kill switch is pretty much the best way to make sure nobody invades our privacy no matter what.

And while a small piece of tape might actually work just fine, others turn to physical camera covers, an accessory that looks much better and which can be found online for just a couple of dollars.

But according to Apple itself, doing this isn’t by any means recommended, as such a camera cover could end up damaging the display.

So instead, you should just rely on the indicator light that shows when the camera is active, which means that you’re supposed to always determine when someone who managed to broke into your device actually enabled the camera.

Use something as thin as possible