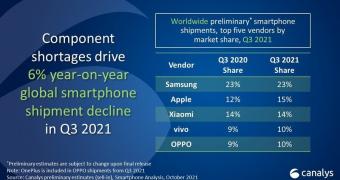 Apple has managed to regain the second spot in the global smartphone race in the third quarter of the year, though, on the other hand, the struggle with the current inventory of chips continues to be a problem for every single company out there.

New data provided by Canalys reveals that the worldwide sales of new phones dropped by no less than 6 percent in the third quarter, especially as a result of the global chip shortage.

“The smartphone industry is striving to maximize production of devices as best it can. On the supply side, chipset manufacturers are increasing prices to disincentivize over-ordering, in an attempt to close the gap between demand and supply. But despite this, shortages will not ease until well into 2022. As a result of this, as we… (read more)