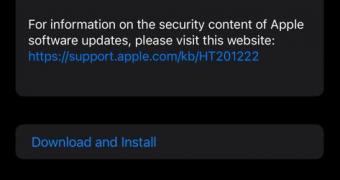 Apple has just released another important update for the iPhone, as the company finalized the development of iOS 15.3.

This is the third major update for iOS 15, the latest version of the operating system that was pushed to users in the fall of 2021.

iOS 15.3 is first and foremost a security update. Apple itself doesn’t provide too many specifics on what’s included, with the changelog displayed on iPhones pointing to bug fixes and security updates. The company emphasizes the update is recommended for all users.

The update, however, is likely to resolve a Safari vulnerability that exposed the browsing history to the loaded websites. Information that was published online in the last few days revealed that hackers could even access the Google ID when a crafted website was visited in Safari.

Available for iPhone 6s and newer

Needless to say, iOS 15.3 is available for all iPhones also supported by the main iOS 15 update, so it can be installed on the… (read more)