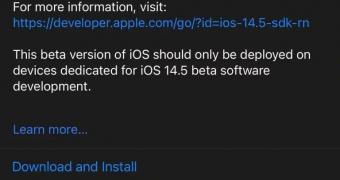 Apple has released a new beta build of iOS to developers, as it continues the work on another big update for all iPhones out there.

iOS 14.5 beta 2 is now available for registered developers, with the public beta now expected to be shipped in just a few days.

Needless to say, this new release is specifically focused on improving the performance of the update and resolving the bugs that were reported in the first beta, so overall, iOS 14.5 should feel a little bit smoother and more reliable after installing today’s update.

Apple is planning some pretty big changes in this new iOS update, and one of the most notable is the code necessary to power Apple’s App Tracking Transparency.

In essence a privacy update, this new feature would require user permission for apps that want to track us across other apps and websites, and unsurprisingly, it has been received with much criticism by other developers out there and advertisers.