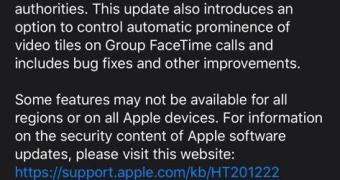 Apple has just released iOS 13.5 to all supported devices, and this time the Cupertino-based tech giant has included major improvements, including the highly-anticipated Exposure Notification API.

What this new API does is as simple as it could be: it allows public health authorities from all over the world to build apps that would be then used to determine the risk of infection with the new coronavirus in specific regions of the world.

Contact tracing apps are already on the agenda for many governments across the globe, and Apple and Google both developed APIs that would allow authorities to develop these tools that could then run on Android and iOS.

iOS 13.5 introduces this Exposure Notification API, so it’s not just a matter of time until the contact tracing apps make their way to the App Store.

FaceID with a mask

Additionally, this iOS update also introduces a new option for users in the United States that allow them to automatically share h… (read more)