Apple on App Tracking Transparency: You Might Become a Product 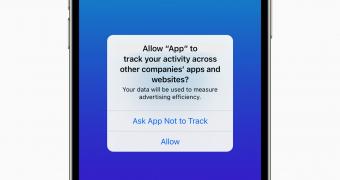 Apple has officially released iOS 14.5, the biggest software update since iOS 14, and one of the most important additions is the new so-called App Tracking Transparency.

This new feature allows users to ask apps not to track them across websites and other apps, and needless to say, it has already attracted a ton of criticism from advertisers and other companies like Facebook.

But Apple says it’s all for protecting users’ privacy, and in a video published this week, the company details how exactly it works, clearly in an attempt to set things clear and defend its decision to implement these privacy controls in iOS.

Apple explains that while some apps collect basic information about you, others build a profile that is then shared with other companies and sold to third-parties.

You are becoming a product, Apple says, and this is important to be able to choose whether you want to be tracked or not.